(1) Designing buildings to be in harmony with townscapes

The buildings constructed by the Company are social assets that are a part of their townscape for a long period of time. We strive to develop buildings and facilities that will blend in with the townscape while increasing value, based on the history that made each respective town what it is today. 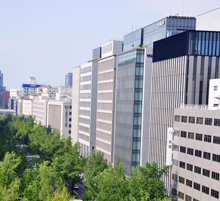 The townscape of Midosuji

We consider contributing to local communities to be an important policy and have established the company-wide Community Involvement Committee as the organization to promote this policy. The Committee contributes towards enriching urban development through funding activities that meet our corporate standards and through employee participation in local community activities.

Once every month, we conduct clean-up activities for the roadsides of Midosuji, which is where our office is located. Our employee volunteers participate in them, and we will work to conserve the environment by continuing such activities. 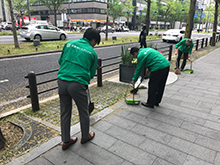 Osaka Classic is an annual music event held in autumn in Osaka City. During the week-long event, classical music lovers flock to attend over 40 classical concerts, held mostly in the Umeda and Honmachi areas. The Company supports this event every year as part of our contribution towards creating regional prosperity, providing the Midosuji Building’s first floor entrance as a concert venue. 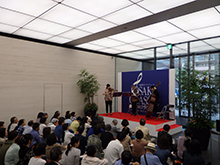 (5) Support of culture and arts

As an ongoing activity to support culture and the arts, the Company makes an annual donation to Arts Support Kansai, an organization that supports cultural and artistic activities in Kansai.
Additionally, the Company donates to various other organizations, such as to the traditional Osaka art form of Bunraku and for wheelchairs to be used in the Osaka City Museum of Fine Arts. We will continue to actively support culture and the arts.